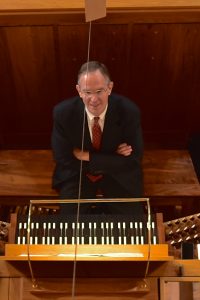 David Christiansen, our church’s Minister of Music, studied organ at Drake and Yale Universities, as well as in France with Marie-Claire Alain. He holds a Doctor of Musical Arts Degree from Yale.  In 2008 he completed the LC-MS Director of Parish Music Colloquy program (theological study). Having previously served churches in Chicago, in Paris, France, and in Texas, he has been at St. Andrews since 1999. His compositions have been published by the Association of Lutheran Church Musicians, Augsburg-Fortress, Bärenreiter, Concordia, GIA, and the Hymn Society in the U.S. and Canada.  As an organ recitalist, he has toured Germany five times, and has performed in the Midwest, Texas, and on the East Coast. At St. Andrews, David leads our church music program, planning music for our liturgies, serving as organist, and directing St. Andrews Choir, Handbell Choir, Brass Ensemble, and Men’s Choir. In addition to his work here, he serves on the adjunct faculty of Elmhurst College and Concordia University.